Two days without sugar. Ini is graving for food that is sweet and salty at the same time. She is lazy to go to the supermarket. What could be found in the house? 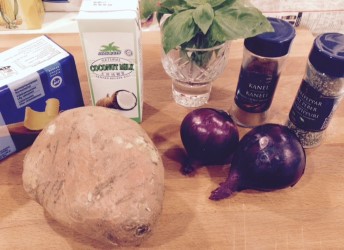 Not a lot of stuff, but could she put her magic fingers and her mind into this, and create something tasty. Yes, she can do it. She will try to make gluten free and vegan spagetti.

It is time to put on some romantic music, and ask her husband to join the party. ´My dear, can you heat the sauna while I cook´ she asks him. ´Why not´ is his answer.

Ini makes spirals of the sweet potato. Then she cuts the onions and basil. 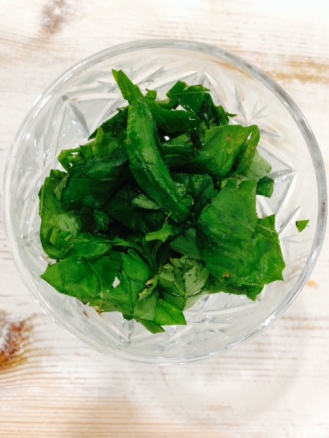 She heats a chunk of butter on a skillet, adds in the coconut milk, onions, cinnamon, black pepper and salt. Boils them for 5 minutes to get the aroma out of the spices. Then she adds in the spiral sweet potato, and boils it for an additional 2 minutes.

Then right before removing from the stove she adds in the basil.

During the time Ini has been making the spagetti, her husband has been heating the sauna, and lighting the candles. They pour two classes of Cameleon organic wine, Malbec.

Get undressed and head for the sauna. When they are back, dinner is waiting for them.

By this time they are starving and they pour two more classes of wine. On the spagetti plates Ini sprinkles some sesame seeds to add a nice twist to the combination.

While sliding the spagetti into their mounts, listening to the soft jazz music and sipping the wine they get a surprise. Sweet potato, coconut, the spices, and the Malbec are a perfect taste combination. A real match!